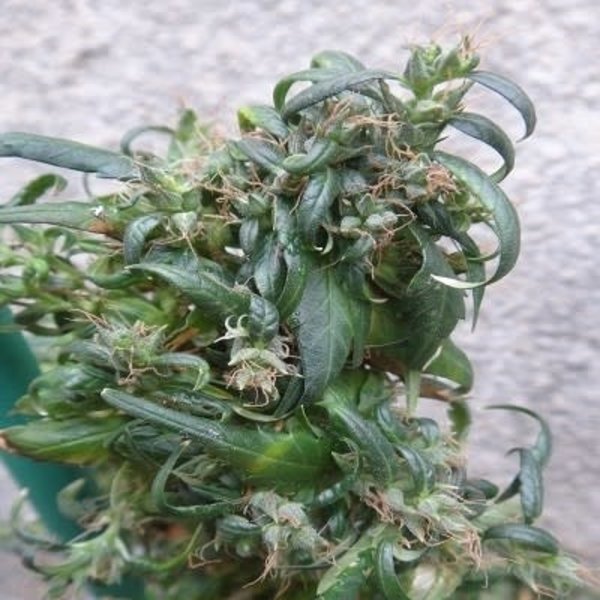 Bouquet - Rough and wild aroma reminiscent of geranium and wild mountain spices. Unrefined and without evidence of terpene relevance, producing only alpha pinene among the different and most common main terpenes.

Terpene profile - Only small amounts of alpha pinene, without relevant presence of other monoterpenes and sesquiterpenes.

Growing Tips - It can be easily grown indoors.Outdoors it can be grown up to latitude 50º, both in hot climates and in climates where the flowering takes place with rain and low temperatures.

We recommend moderate levels of nutrients for the whole cycle.apanese culture has a tradition of hemp use dating back at least 10,000 years, with scientific certainty of its cultivation on all its islands for more than 2,000 years, and in particular on the northern island of Hokkaido, the Japanese prefecture that has traditionally grown more hemp since time immemorial. In fact, cannabis grows wild in Hokkaido, with authorities having to eradicate nearly a million plants every year.

There is no scientific or cultural evidence of the psychoactive use of cannabis in Japan, although this doesn’t mean it can be ruled out completely. Because, although in this country cannabis has been cultivated mainly for textile use, it wasn’t until after WWII that Japan finally regulated cannabis for THC content, and cannabinoid analyses carried out on varieties growing in Hokkaido (both hemp and wild) over the last 2 decades confirm that Hokkaido cannabis has low THC and CBD values, but not null, indicating that the traditional varieties from Hokkaido were probably never intentionally selected in order to completely eradicate their cannabinoid production.

This cannabis strain from Hokkaido grows with a strong and corpulent bearing, with broad leaves and fat stems, growth characteristics that are traditionally associated with Indica varieties. The general appearance and leaf morphology of this Japanese variety bring to mind the indica phenotype of our China Yunnan, although the Hokkaido has darker leaves, greater vigour, longer node spacing and greater branching.

On the other hand, this variety from Hokkaido shows semi-autoflowering characteristics, meaning that outdoors it starts flowering not long after the summer solstice. It has a spiky floral development that reminds us of sativas, producing few trichomes on the ovaries. The flowering develops very quickly, maturing in only 6-8 weeks.

All this leads us to think that this variety is probably related to the old hemp varieties grown in Hokkaido. Its lack of, or very low hermaphroditism is a sign that there has been human intervention at some time in its development. Genetic analyses performed on this variety indicate that it is a uniform variety, homozygous and with very little genetic variation, with a rare and unique genotype, not related to other varieties of European or Russian hemp, so the origins of this variety suggest that it is more related to Chinese or Korean cannabis varieties.

Although this variety does not have notable psychoactive or terpene qualities, it may be of interest to breeders of low cannabinoid hemp, in search of stable, fast-ripening varieties for medium latitudes (40º-45º), and for cannabis scholars and preservationists, since the HIHA (Hokkaido Industrial Hemp Association) has recently signed an agreement with the French government to introduce new European hemp varieties with very low THC content (less than 0.2%) in Hokkaido, meaning that the old varieties of traditional hemp on the island could be replaced and extinguished in the short term.