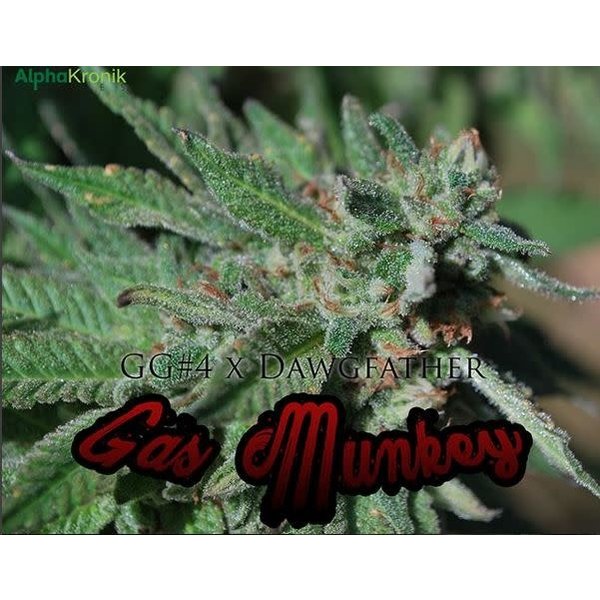 "Gas Munkey is a hybrid by Alphakronik Genes that came to fruition through their project isolating individual thiols (mercaptans) in the Cannabis plant. Thiols are the contrasting flavonoid found within the Cannabis species that makes up the stinky smells throughout nature. Garlic, Fuel, Skunk, Gas, Onion, and Feces smells all come from Thiols rather than Terpenes. Thiols are a carbon chain with a sulfur atom connected at the end of the chain rather than an oxygen atom as found in Terpenes. They are used in the Cannabis plant to attract bugs to catch in their sticky traps (trichomes). They then use drop the dead prey to the ground and use the symbiotic relationship with the soil to feed itself. Alphakronik Genes is proud to be the first breeding team in the world to focus on such focused research, and are now proud to introduce a series dedicated to the “stink” factor found within Cannabis, and are working to develop new research models to advance scientific discoveries throughout the Cannabis genome.
Gas Munkey is named such due to its heavy-duty fuel aroma and flavor. It is backed by onion and garlic, with a nice bready note finish that lingers in the mouth long after you’ve stopped your tasting. This one is all about this stink, no berry or sweetness other than the hint of Walla Walla Sweet Onion lurking in two phenotypes. Growers can expect upwards of 3lbs per sq. meter per 1000 watt light when grown correctly. This does very well for extractions, as the thiols tend to be preserved very well in concentrates rather than in flower form, as they oxidize very quickly and dissipate."-AKG