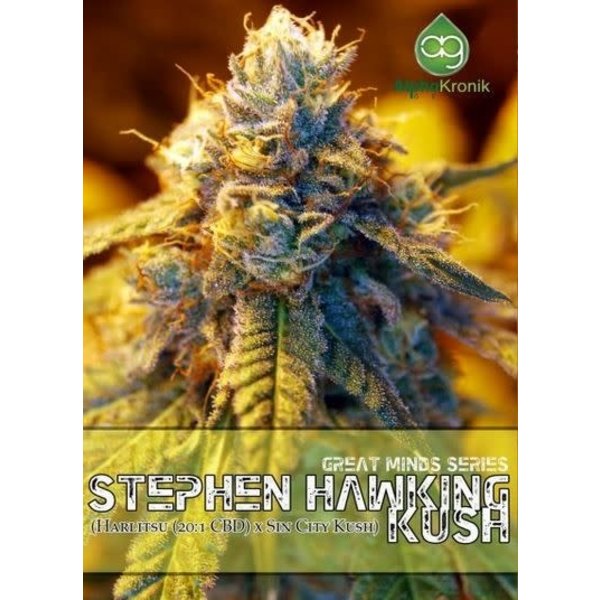 Stephen Hawking Kush is the second release in Alphakronik Genes' Great Minds" series, named after famed physicist, Dr. Stephen Hawking. It is also the first offering of what has been called their CBD+ line, a collection of hybrids bred to enchance the Cannabidiol levels of the plant. Starting off with the rare clone only strain, Harlitsu, AKG pollinated it with Sin City Kush to create what has come to be known as SHK. There are three specific phenotypes in this hybrid, one that is just like its mother, tall, stretchy, with heavier yields and higher CBD content; the second more of a hybrid between the two that has great coloration during the harvest window and a 5:1 CBD level; third the "Fathers' Daughter", which is a smaller, pine tree shaped purple plant. SHK has a vibrant cherry and berry flavor, with a slight hint of mint on the palette, and a berry finish. Extracts increase the mint/menthol flavor. Stephen Hawking Kush has been known to aid in the treatment of muscular dystrophy, epilepsy, ADD, anxiety, multiple sclerosis, auto-immune disorders, nausea, and generalized pain symptoms."-Alphakronik