The founder of Scapegoat Genetics has been cultivating since the early 90’s. In the “overgrow” era where you could only find seeds for sale on the internet, the founder spent thousands of dollars trying to find the most genetically enhanced seeds available. He founds himself in possession of classics like Reservoir and Chemdawg seeds. He began learning about the genetics, playing around and formulating his own unique strains. Coming from a family that valued growing after generations of grape growing, the founder discovered he had a talent for creating genetics that produced cannabis flowers that were powerful and flavorful.

Scapegoat Genetics provides flower and seeds to the cannabis community and marijuana industry. Those looking for premium medical marijuana flowers can purchase their meticulously cultivated flower. If you’re interested in growing your own medicine, Scapegoat provides their spectacular seeds for cultivators of all expertise.

Scapegoat Genetics’ flower has been a favorite for extract artists due to the massive amounts of trichomes on their flowers. Their flowers have been the source of extract brands such as Wolverine Extracts, NLD Extract, and Don Draper. 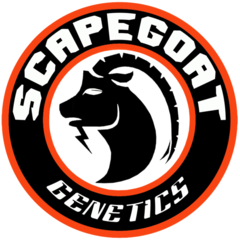