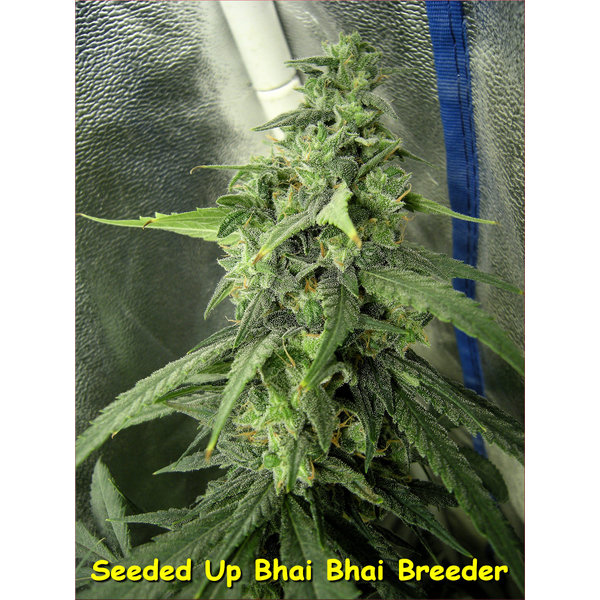 The (paternal P1) father is my Cindy Congo. 99% pure sativa that packs a very powerful punch with very long legs—3 hours—I am very familiar with this genotype/hybrid so known marker expressions allowed me to select for largest yielding with greatest resin production potential genetically. He was a stud all the way around and was put through (his clones) tests like drought, excessive pruning, and over-topping to check vigor reserves.
Mother:

The female was hybridized by a good old friend of mine, Opie Kenope. He crossed an old-school Burmese (back from when it was still called Burma) with a Juicyfruit Thai. These are fairly incredible hybrids, especially for sativa lovers, but due to the Juicyfruit Thai being the Canadian hybrid and not the one from Holland, there is some impressive indica facets to the high-type. Also, the yields are very good with these, large dense buds dripping resin. I coined the name for this cross calling it “Bhai Bhai” a whimsical contraction of Burmese and Thai.
Congo Bhai Bhai Hybrid:

The bit of indica in this hybrid really will make for a complex high-type and while fully a sativa dominant she will have a small body hit as well. Because of the Burmese and Congo in this hybrid I would not recommend this for those of you who get paranoid on sativas. The Burmese especially is notorious for her edgy energetic side. Both the Cindy Congo male and the Bhai Bhai females were easy as a dream to clone and rooted easily and fast. The flavors and smells of most individuals will range between hash/honey oil and Skittles, a real exotic treat for sure, and both Bhai Bhai and the Congo are insanely potent parents—yikes!

I wouldn’t recommend growing this outdoors along the coast, or where any kind of morning fog or mist is a thing. She may be alright with limited exposure, but I would advise against it.
The Bhai Bhai female was easy to grow just a little bit unruly, so this hybrid is recommended for growers with fair growing skills at least.
She’s not really fussy at all about anything I noticed.
The clones of the Bhai Bhai were much more manageable than the seed plants in containers, so I fully recommend flowering clones in containers.

Please do not sprout these on a 24/0 photoperiod and KOS recommends a photoperiod of 16/8 for sprouting and until 30 days old Never use a 24/0 photoperiod. Always allow plants (or clones of plants; and clones are the same age that the seed plant would be no matter how many clones of clones) to get at least 60 days old from sprouting, before starting to flower, for maximum resin production. KOS always recommends organically growing our gear for the full appreciation of smells and flavors.

When it comes to topping or not topping the Congo Bhai Bhai, I will tell you that she has vigor with tood, heh heh, so topping her causes her to really get wide and because of her larger dense/heavy buds, I would be prepared to use some bondage on her if topped. I think I would advise you to try her untopped first