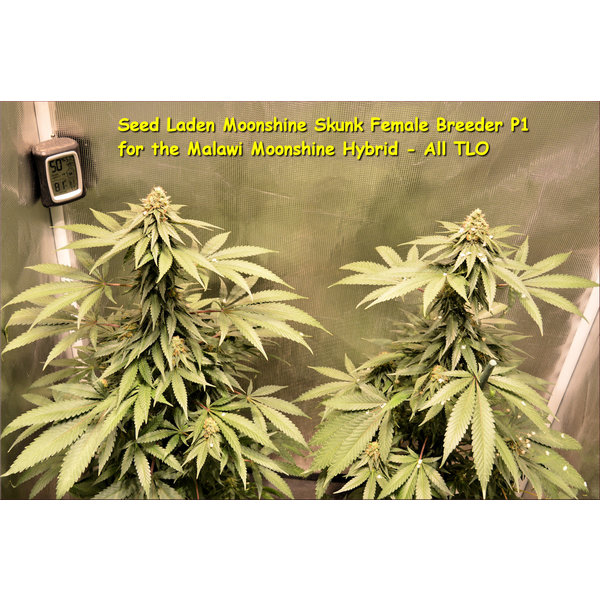 The (paternal P1) father is my Cherry Malawi; a hybrid of landrace Malawi I acquired from South Africa over a decade ago from “Tokestar”. And my old F3 Cherry Bomb out of Hawaii, also acquired over a decade ago. This male brings some serious resistances, vigor, and heartiness to the hybrid; along with massive resin production and high yields. Also, the Cherry Malawi is well known for creeper/intense potency with effects that last 4 hours easily and imparts exotic honeysuckle terpenes to the whole flavors and smells side of things.

The female KOS’s own Moonshine Skunk; a 2-way hybrid of Deep Chunk and Skunk (Red Russian Skunk) both long IBL lines with severe goodness across a wide bandwidth. The terpenes are acrid in this hybrid, skunky and honey-oil/fuel with colossal amounts of resin produced on huge stalked trichomes.

The Malawi Moonshine will no doubt get fairly large outdoors or given a high energy environment. This hybrid is really “The Clash of the Titans” bringing together long inbred lines from all over the world. The Skunk line is the original as far as I know, and I was there when Skunk became a thing. I call my Skunk “Red Russian Skunk” because before it was called Skunk, it was called Red Russian. A very long IBL (inbred line). The Malawi, straight from South African local cannabis farm, to me. Super exotic from terpenes to effects, super drought tolerance and wild-child vigor with tons of resin. Last but not least, the very long IBL from Afghanistan, the Deep Chunk—wicked exotic phenotypes will abound.

I wouldn’t recommend growing this outdoors along the coast, or where any kind of morning fog or mist is a thing. She may be alright with limited exposure, but I would advise against it.
She will do extremely well in dry environments and can even handle some hard-core drought stress; and snap back like a champ. She will have the Malawi and the Afghani leading the charge here.
Indoors she should rock very well, high vigor and strong branching makes her a good candidate for nets when topped. Big colas are a pretty easy bet with most phenotypes.
I would really watch out not to over-water this baybee.