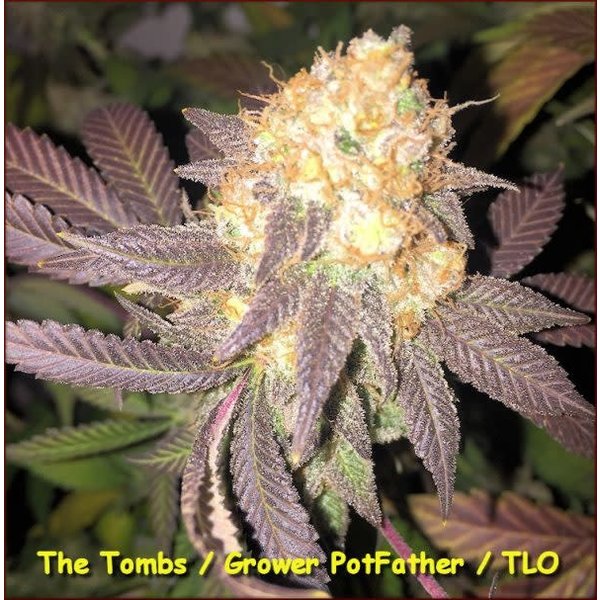 I tested the Iron Cindy male in my “Iron Maiden” tent of torture, where I stress the plant several ways including over pruning, heat, and drought, and he passed and always bounced back fast with flying colors. The Iron Cindy is a hybrid of Dutch Flower’s Metal Haze and my C99 (male). Bringing to the table some serious yields, along with some sharp Hazey and overripe figs as far as the flavoring and smells go. Hearty and highly adaptable, that’s the way we like ‘em.

The Blue Rhino 1947 is the female in this cross, and she possesses some very outstanding qualities that more often than not, are expressed in her offspring. The first one is that she gets very dense (I mean yikes dense) buds and yet also deals with mold outdoors very well, especially the Bud Rot type so I would expect some good resistances in The Tombs as well. The second one is that she possesses a very unique muscle spasm calming quality that I can attest to personally, and one of the reasons I like this baybee around.

The Tombs is sure to be a “daywrecker” type with extreme ptency almost certainly. The BR1947’s berrylicous flavors and smells should blend uber exotic with the Iron Cindy influences.