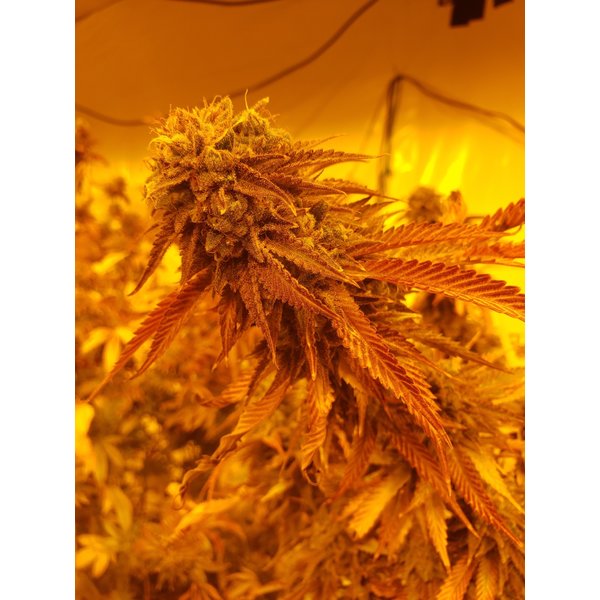 The Sauce x Glue #4
Uncle Pete crossed the 2 most potent and resinous plants he could find to make the Drunken Gorilla. Knock down power combined with an excellent yield makes this strain one for every garden. Grows well indoor and out. Likes to be big and grow tall.
About The Sauce
No longer just an old-timey synonym for booze, The Sauce is a sativa-dominant that offers complex flavors and a versatile high. Created by prolific breeders Exotic Genetix -- who have also given us Kimbo Kush and Cookies and Cream -- The Sauce is a cross between hybrid Green Ribbon and potent indica Gorilla Glue #4. With an earthy, multi-layered flavor, it’s no wonder that this bud was named Best Flower in the 2015 Dope Cup in Seattle. Its THC has been measured at between 15% and an impressive 28%.
In contrast to their standout flavor, The Sauce’s flowers can be somewhat visually underwhelming. The buds are small to medium in size and cling together in pebbly, popcorn-like formations. These flowers have an indica-typical structure, with their small leaves curled tightly inward toward their central stems. The leaves themselves are a vibrant spring green and are threaded through with curly, pale yellow pistils. Finally, a thorough coating of translucent amber trichomes accounts for this strain’s psychoactivity and makes the flowers very hard to break up without a grinder.
When properly cured, flowers of The Sauce burst with the rich, earthy scent of cocoa. Hanging out underneath is a pronounced sweet and sour tang. Meanwhile, grinding up or breaking apart the flowers releases some fumes that are redolent of gasoline and skunk. When they’re burnt, these buds burns with a thick and acrid smoke that can often induce coughing and watery eyes. On the exhale, this rich smoke has a tropical citrus flavor mixed with some fruity notes of skunk.
About Glue #4
Glue #4 (also known as GG4) created by GG strains is a Sativa-dominant hybrid, a multiple award-winning strain, famous for its high THC content. It averages 18 to 25 percent THC, but you may find it as high as 32 percent at some dispensaries. The CBD is very low, ranging between 0.05 and 0.1 percent.
This strain gets its name because of the resin that collects on the scissors when trimming. Gorilla Glue #4 has several parents due to extensive back crossing – Sour Diesel, Sour Dubb, Chem’s Sister, and Chocolate Diesel.
The hybrid strain has won awards at the 2014 Cannabis Cup in both Los Angeles and Michigan. It has been described as a bunch of trichomes with a few buds, leaves, and stalks sticking out.
The aroma is very strong and is mostly diesel with notes of chocolate and coffee, although sweet and earthy is also used to describe it. You’ll be going back for seconds due to the full-bodied and flavorful smoke. The buds are green with orange hairs. It is very dense, spongy, resinous, and covered in trichomes.
Glue #4 makes you chill, medical and recreational users, both. It gives a full body melt, despite the Sativa-dominance. The body effect may be a result of the THC/CBD ratio, the terpene profile, and/or the synergistic effects of the cannabinoids. Along with the body buzz, expect uplifting, cerebral effects. Not exactly a strain to use in the morning, Glue #4 is more suited to a day off from work or to end the day.
This is our 2 gassiest, funkiest, nastiest strains we could find. We crossed them. The result is a massive producer with very potent and stinky buds. High calyx to leaf ratios and a stink like no other define this strain. HIGHLY recommended.