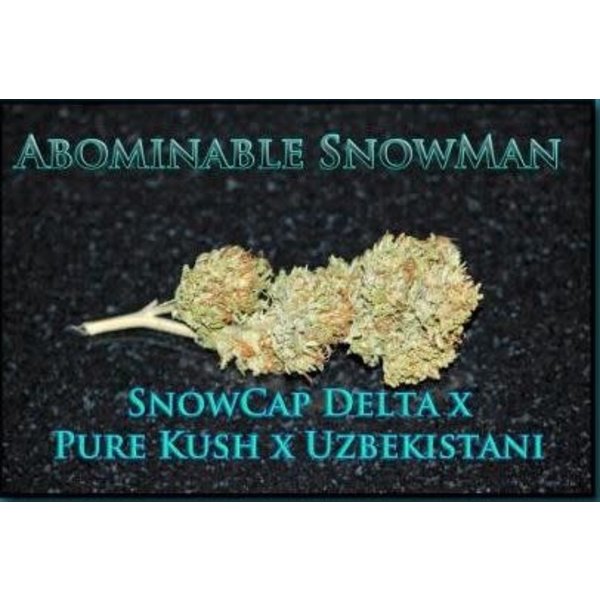 SnowCap Delta is our early work with SnowCap mixed with the Acapulco Gold x C99 male backcrossed to the original SnowCap clone.

SnowCap was a strain my friend got the SnowMan who is part of SnowHigh. The real SnowCap is a large spear forming, large yielding, very frosty and resin producing line which favors outdoors but does well in most climates. The aroma is a tropical candied mint to pine which tastes the same as it smokes. Remarkably one of the few strains which tastes the same from the beginning of the joint to the very end. The taste and smell is one of my all-time favorites and the type you can’t keep your nose out of the jar because it smells so good. The effect is a strong body with an uplifting head that I gather is probably a combination of genetics from the Humboldt Snow clone or Oregon Sno clone which is most likely the same thing combined with a South East Asian possibly a Thai strain. Abominable Snowman combines the SnowCap Delta with a Pure Kush which produces super potent large colas of modern “Kush” phenotypes with a bit of sweetness. Combined with an Uzbekistani line rare in itself and of a more northerly latitude then Afghanistan which at one time was the source of some of the finest hashish producing families of ancient Chinese Turkestan.