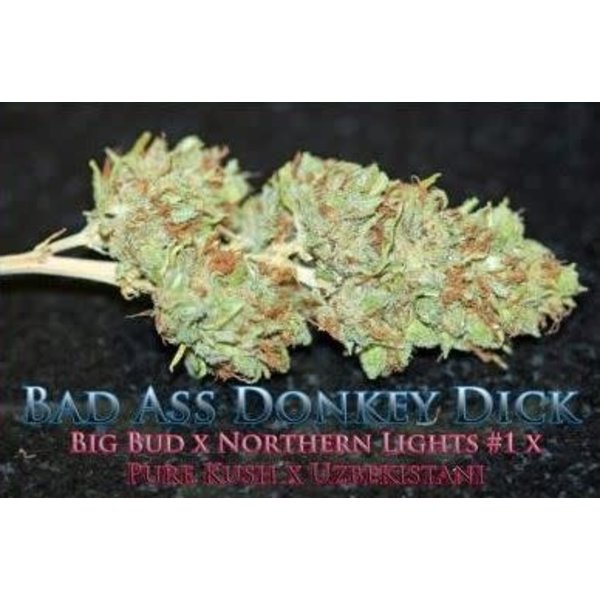 Bad Ass Donkey Dick is a mostly indica variety from SnowHigh Seeds and can be cultivated indoors (where the plants will need a flowering time of ±67 days) and outdoors.
B.A.D.D. is another combination of heirloom and landrace Afghani Kush genetics mixed with 80’s era commercial strains. The original Big Bud produces huge buds in diameter and length, like Donkey Dicks. The old Northern Lights #1 also produces large, resinous buds that yield heavy harvests. Bringing the old work horses together with landrace Uzbek and heirloom Pure Kush will allow the grower to produce heavy yields while maintaining a unique high which used to be prevalent in the early 70’s to late 80’s. Meshing the LA Pure Kush which is very potent, reminiscent of the original Kushs before it became OG Kush and before the lemon pine-sol became part of the strains make up. The LA Pure Kush has vanilla undertones and a true kushy taste that true aficionados will know. The Uzbekistani landrace imparts large colas and hash flavors to its progeny. B.A.D.D. mixes the commercial viability of the old world afghani, Uzbek lines with the modern flavor of the Pure Kush to offer growers and breeders another breeding tool for future exploration allowing the grower something familiar but at the same time exposing them to a new genetic base.